Perry: The Official Mascot of Birmingham 2022

Our Perry can’t wait to get out and meet everyone at Birmingham 2022. But until then, there are plenty of fascinating facts to learn about our friend – from his multicoloured hexagons to his horns and his basketball kit. 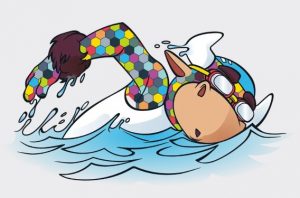 Perry is named after Perry Barr, the area of Birmingham where the transformed Alexander Stadium will host the Games’ opening and closing ceremonies and athletics events. Perry will be trackside to get the party started!

WHY IS PERRY A BULL?

No animal says “Birmingham” more than the bull! We’ve had a Bull Ring market for hundreds of years, near the modern Bullring shopping centre, with its iconic bronze bull sculpture. Perry is a different kind of bull, though – colourful, cheeky and kind – Brum’s latest icon!

We are the Games for everyone – that’s why Perry’s hexagons are all the colours of the rainbow! They represent the coming together of the Commonwealth in equal partnership with the diverse communities of Birmingham and the West Midlands. Hexagons are also the strongest shape – strong like our Commonwealth Games family.

Perry’s gleaming medal is a nod to Brum’s historic Jewellery Quarter, the largest of its kind in Europe! The area produces 40% of the UK’s jewellery, and it’s also home to one of the world’s largest Assay Office, which hallmarks millions of precious items every year.

Perry is sport mad and will have a go at anything! Can you spot the blue, red and yellow stripes on his kit? They’re the same colours as the official Birmingham flag.  Birmingham’s motto is Forward, and Perry is certainly looking forward to entertaining the crowds in 2022!

@NunBedSwim thank you for a great meet this weekend 👍 instagram.com/p/CW2n2bSLOZm/…

Massive we’ll done to all of the Beeches swimmers who took part in this weekend’s open meet at Nuneaton. Most swims were PB’s and lots of Warwickshire times were gained. Brilliant 👍 instagram.com/p/CW1atCFrGzO/…

A massive thank you to @NunBedSwim for all of the hard work that went into their swim meet this weekend. @PerryBeechesSSS loved it - Thank you 🙏

These four amazing ladies swam a personal best time in nearly every single race they did! They were a dream to be with today - big we’ll done to the @perrybeechesmasters ladies today 🏊👏👏👏👏🏊‍♀️🏊‍♂️🏊 instagram.com/p/CWy5sQcLqEP/…

In case you missed it

See our full profile at MyClasses.org.UK.